Startups and Upstarts in ‘Silicon Allee’

Notes of a Professional Event Photographer in

has been called multi-kulti, poor but sexy, the ever-changing city and most recently, Silicon Allee—due to the increasing number of tech startup companies moving into the Bear Pit.  Rents are relatively cheap—though steadily rising, as creative types and startup geeks continue to flock to ’s culture capital to stake their claims on the future. 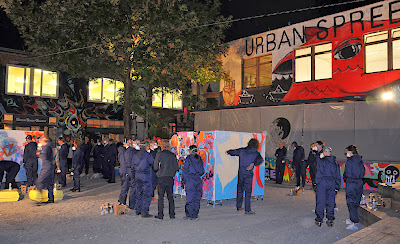 Some of the more clever event planners have taken full advantage of ’s ever changing city status to host tech events in art parks and open spaces in addition to the tried-and-true hotel conference halls.

The Tech Growth Summit in was one such event.  Innovators, inventors and investors all met in recently to throw their hats in the Silicon Allee ring.  The opening dinner reception was held at Urban Spree Gallery in the East Berlin neighborhood of Friedrichshain—a popular art/club colony sculpted out of some of the industrial rubble and rust of the former East Berlin.  Urban Spree Gallery often hosts the latest work by up and coming artists and urban sprayers.

The group team building exercise for the evening:  spray can graffiti competition. It was a nice change of pace from the typical event meeting to watch executives don overalls and masks, shake their spray cans and go to town on some blank walls in the open air garden.

The Big Day of the Tech Growth Summit commenced the day after in two equally exciting venues:  a refurbished, former electrical power plant in Berlin-Kreuzberg and the closed historical airport Berlin Tempelhof.  If nothing else, is the master of pulling trends out of detritus:  a swanky, modern interior with leather lounge couches filled the floors under the vaulted brick heights of an open former factory hall and wrought iron stairs ascended over fountains spewing bubbling jets of red-lit water.

Later in the day after the convention adjourned, we traveled to the former site of the Berlin Airlift, Flughafen Berlin-Tempelhof (). Conventioneers consumed cocktails in the massive open space of the departure hall. Cocktail waitresses in vintage airline stewardess outfits shook their shakers at check in counters under the signage of various living-and-dead airlines, while suave barmen shoved crates of booze and glasses through the luggage conveyor belts to the waiting bar staff. 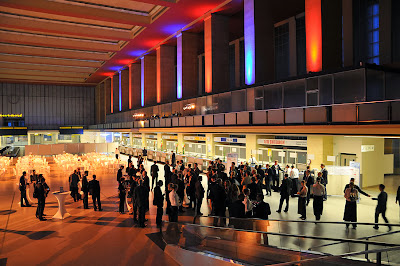 Cornelia Barbara Yzer, Senator for Economics, Technology and Research, , addressed the crowd of visiting foreign e movers and tech shakers.  Her message was clear: come to .  The doors are wide open and the forecast was mostly sunny—though I managed to pick out a parenthetical warning from one of the other speakers: let’s not make another bubble economy like or others who are still reeling from the fish-and-cut-bait methods of less-than-scrupulous investors in the last decade. Working together, they said, we could all build an economy that works for everyone involved.

And on that note, I grabbed a drink from the check in counter and raised it. 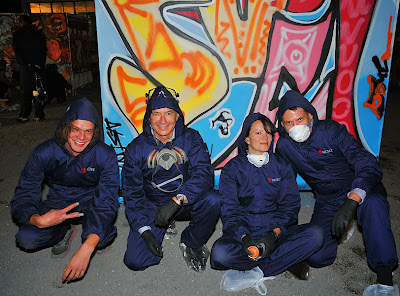