File under WTF WERE THEY THINKING?

Recently, under cover of night, vandals applied paint to the walls of an innocent building in .  Ironically, they weren’t blasting graffiti bombs all over the dump—they were painting OVER two of the most famous street art wall murals in .  Then they talked to the media.  Then they sounded like media-groomed art-tards with carefully-prepared sound bites like “We felt it was time for (the artwork) to vanish, along with the fading era in Berlin’s history that they represented” and “The white–well, in this case black–washing also signifies a rebirth: as a wake-up call to the city and its dwellers, a reminder of the necessity to preserve affordable and lively spaces of possibility, instead of producing undead taxidermies of art.”

Who asked you to do it?  The ACTUAL artist (Blu)?  I don’t think so.  You say you were ‘co-creator’ of the murals and yet your ‘credentials’ as a ‘cultural scientist and curator focusing on art in the public domain’ sound like happy horseshit prepared for you by the people who actually paid you to paint over the walls.  While the rest of is subject to hostile takeover from gentrification investment whores, you just decided to kill the art in a pre-emptive strike against yourselves.  Art suicide?  The problem with your reasoning is that art is a creative process, not a destructive one.  If we need any more proof of your collusion with sneaky developers, just look at the big fence around the property.  Somebody unlocked the gate for you and your crane.  Did the developers provide the crane as well, or is that a standard tool for scrappy street artists?  By working with the developers to blacken Blu’s art, you tar yourself with the same brush. 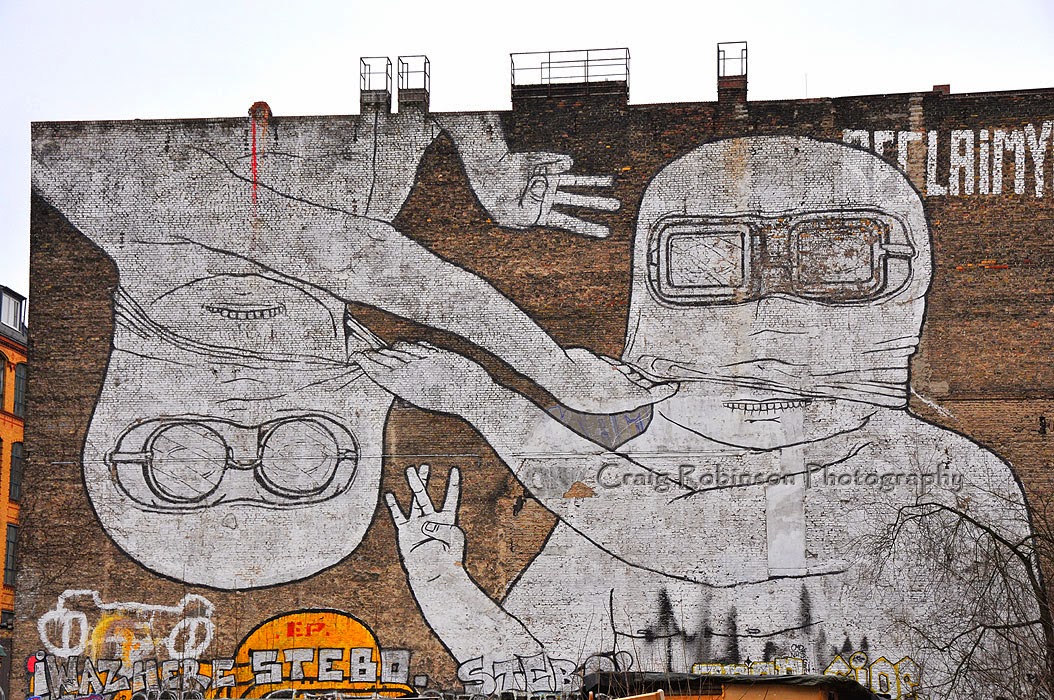 These particular murals had meaning.  They were not just tags left by random dogs spraying their turf.  These paintings were carefully thought out and executed by an internationally famous street artist from named Blu.  While I am only beginning to understand the significance of the two upside down figures (I only recently learned they were flashing East and West Berlin gang signs), the headless figure of the business man with two gold watches chaining his arms was a work of brilliance.  It became one of the icons of —right there along with the East Side Gallery section of the Berlin Wall.  Hell, I even have a Hard Rock Café pin in the shape of a guitar with the damn mural on it. 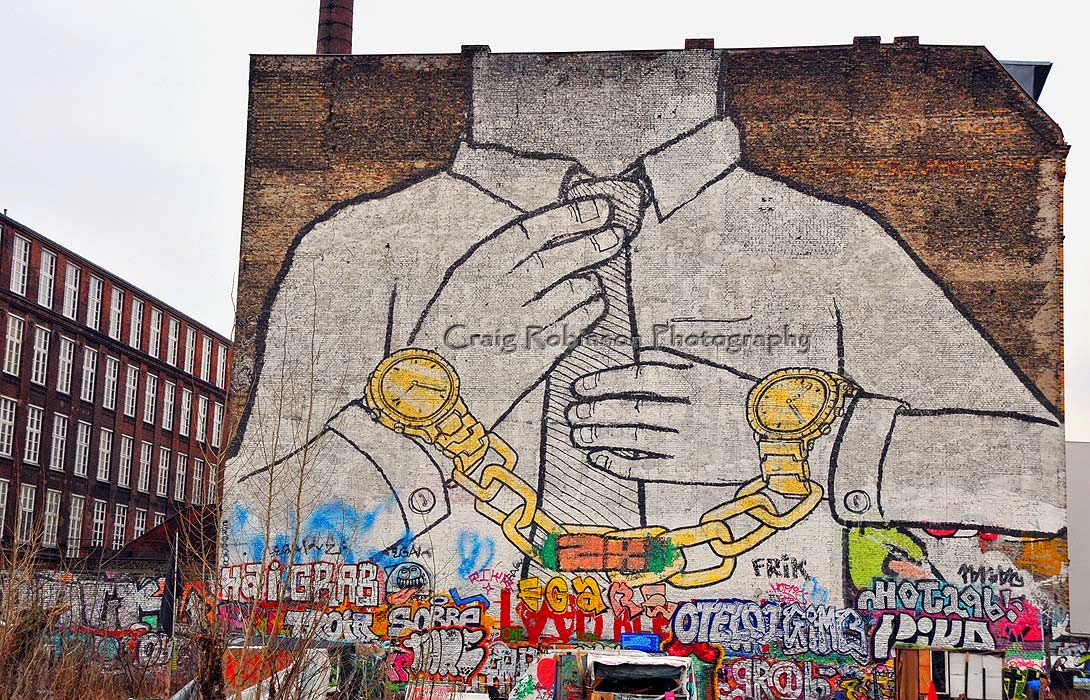 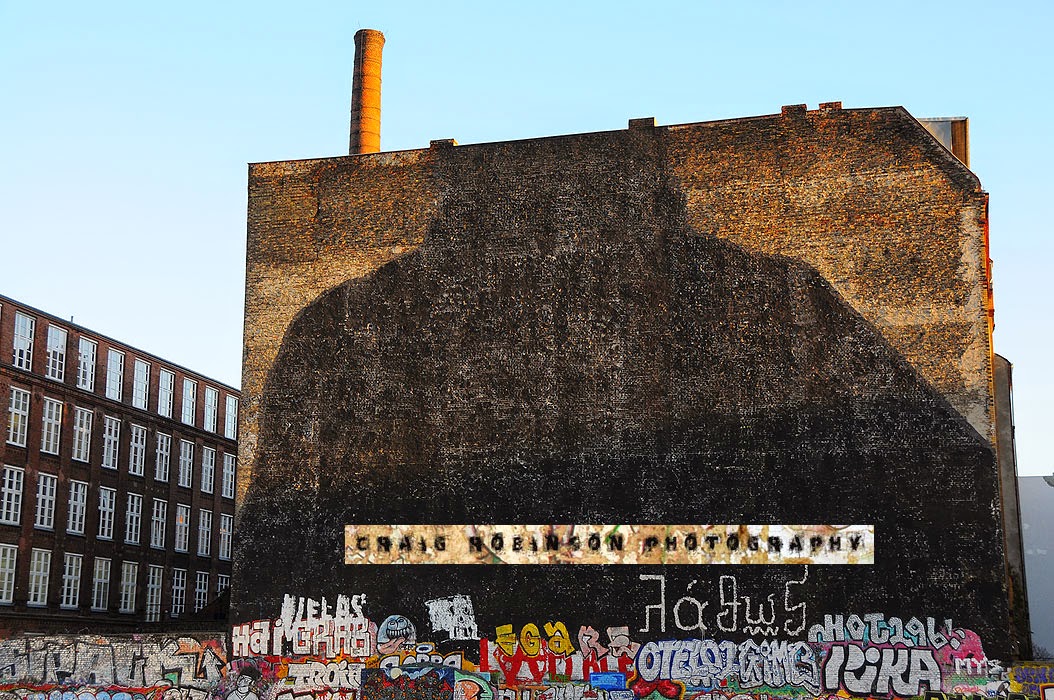 A year ago I was walking by the now-deceased art on a similarly mild winter day.  The simple white wall figures loomed large over some squatters in a field. There were still a few shanties left in Camp Cuvry, the open-air squat beneath the graffiti giants.  I was able to walk in and drink beer with some of the remaining campers.  I did not envy them in their uphill struggle against the developers; nor did I envy them sleeping in a field in the winter.  I shared beer with them for the privilege of talking with them a while before their inevitable ousting.  Their eviction was imminent simply because they were sitting on a view of the river.  Riverfront developer Mediaspree’s policy up until now has been: 1) buy every dilapidated thing along the river (occupied or not), 2) drive out the ones who won’t be bought out.

While I was writing a story on Berlin's Beach Bars a few years ago, a few of the bar managers were packing their shit while they were speaking to me.  Others warned me that within a very short time there would be no places for ordinary people to have a drink with a view of water.  Only high rise condos and office buildings would remain.  High rise condos and office buildings seem perfectly reasonable in cities like or , but in they are about as useful as an asshole on your elbow. 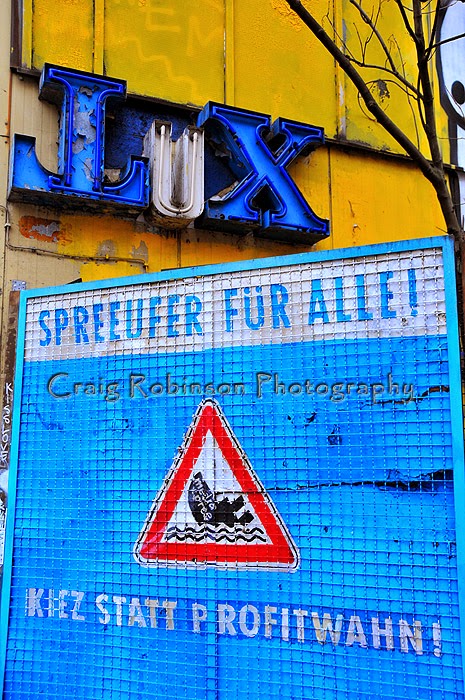 (Neighborhoods Instead of Profit Madness)


The majority of Berliners do not like what is happening to their city.  And this majority is not just a bunch of grungy slackers crying about change; all of them embrace the idea of as the constantly changing city—a city where anyone with an idea can take over a disused, dilapidated factory and make something of it.  But there are some changes that can only harm a city; changes which benefit a few wealthy investors at the expense of driving out the movers and shakers of .  Once again, the artists are the unwilling shock troops of gentrification.


They came, they saw, they left their creative mark.  Then the developers conquered.
Posted by Craig Robinson at 06:36 No comments: