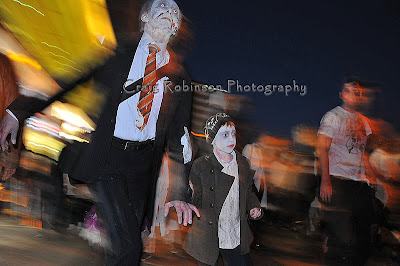 A flash mob of dozens of costumed 'zombies' shambled through the streets of on .  This was the latest outbreak in a growing global 'infection' of Zombie Walks in various cities all over the earth.

Everyone loves a big, juicy zombie.  With a plethora of zombie films and television shows topping the entertainment charts, the undead may one day knock King Vampire out of the horror throne.  I've personally loved zombies as long as I can remember; the first zombie film I recall watching was the 1979 Italian made ‘Zombie.’   I was around 14 when I saw the film and I gazed in wide-eyed wonder at the blood, rot, gore and bouncing breasts displayed throughout the film.  I was probably too young to see the bouncing breasts as an American.  The blood and guts?  No problem.  Americans are weaned from milk to blood. 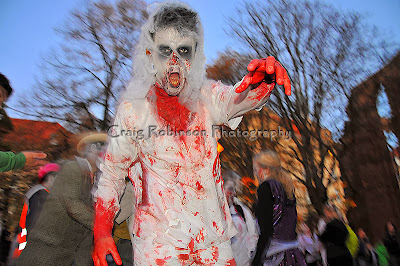 On a clear night at dusk, the Berliner zombies met outside the Gothic ruins of Klosterkirche and shambled through the streets to finally invade Alexanderplatz and strike terror and joy in equal parts to anyone who happened to be in their path. At various intervals in the terror schedule, several zombies danced a choreographed routine to the music of Michael Jackson’s ‘Thriller.’ 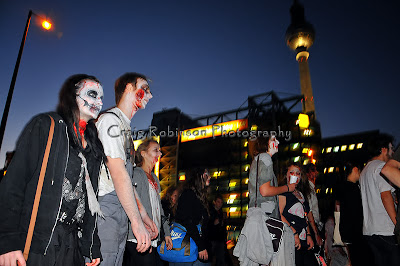 The range of costume creativity was as diverse as the zombie figure itself:  some of the zombie walkers had white faces with yellow eyes and bloody mouths; others had gray faces with black circles around the eyes.  One tech geek zombie had a bloody hole in his shirt and a mass of wriggling worms moving within.  I looked at my photographer friend and said ‘That’s probably a smart phone app of some kind.’ 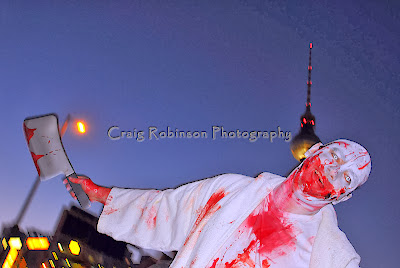 These are only a few of the many photos I took while stumbling, shuffling and shambling along with the Berliner zombie horde on Saturday night.  Please don’t hesitate to visit my website and contact me for your next photography or zombography project in ,  or beyond…
Posted by Craig Robinson at 07:22 No comments: