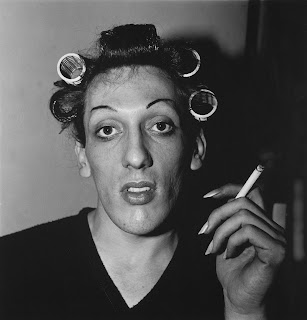 Life is a checklist for some; mine contains a list of famous photographers who have greatly influenced my decision to become a photographer.  My list of heroes in this case is mostly heroines, as it were:  Diane Arbus, Annie Liebovitz, Margaret Bourke-White, Dorothea Lange, etc.  The latter two ladies literally invented social documentary photography.  Diane Arbus and Annie Liebovitz concentrated on individual portraits.  Liebovitz is famous for her iconic images of celebrities:  John and Yoko in NYC (taken just hours before Lennon was killed) and Whoopie Goldberg's smiling face emerging from a tub full of milk (to name just a couple of obvious ones).  Diane Arbus' images of ordinary and not-so-ordinary individuals--transvestites, dwarfs, twins, rich and poor elderly folks, young couples in Central Park--speak as much about humanity as a collective as they speak about the individuals.  One of her enthusiastic quotes, printed large on the gallery wall of Martin-Opius-Bau in Berlin:  "I want to photograph EVERYBODY."

Part of what draws me to portrait photography and social documentary is the open quality of the subjects.  They have no mask (though many masked figures appear in Arbus' work), no facade, no pretense.  I believe that is the true art of the portrait,  the ability to get the subject to let their guard down.  My theory might sound a bit sexist at first, but I believe female photographers are much better at this task than men.  A woman is less threatening, less invasive (perhaps) and possibly more trustworthy than her male counterpart.

I can't count how many times I've been threatened with physical violence in my quest for photos.  I don't want to violate people's privacy, steal their intimate/emotional moments, or otherwise portray them in a way which lessens their dignity.  Whenever someone expresses a negative response to my camera these days, I lower it, apologize and walk away.  I would rather have no photo than to take someone's dignity.  I have methods to achieve good portraits under difficult conditions.  I find that I get better shots in countries with a language barrier.  My attempts at mime--pointing to my camera, then the subject, big grin--generally gets a much better result than just snapping.  Also, eyes are important in a good portrait.  If they don't see you, drop their mask, let you in to their world, the portrait fails.

I can now check two off of my list of photo heroines:   Annie Liebovitz (National Gallery, London, 1994) and Diane Arbus (today, Martin-Gropius-Bau, Berlin).  I am thrilled that photography is not a lost art, and that my list is getting shorter.  The same Berlin gallery will be showing Margaret Bourke-White in the near future.  One more and I've got the whole set.
Posted by Craig Robinson at 09:33 2 comments: