A Photo Exhibition at Martin-Gropius-Bau, Berlin
20 September to 19 December 2012 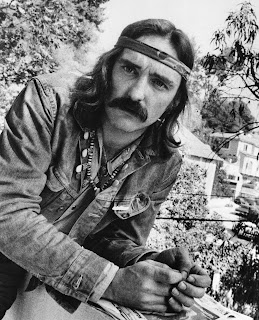 Dennis Hopper was a photographer for several years before his creative trajectory was forever altered by the roaring cult film engines of Easy Rider.  In one quote on the wall of the Martin-Gropius-Bau gallery, Hopper explained that he ‘took photographs to fill the void inside of him’ during his formative years.  After that he ‘never picked up a camera again.’

Crates of Hopper’s photographic prints were discovered after his death. He was either preparing for a retrospective exhibition on the 60s—when all of his photos were taken—or someone saw a chance to make some posthumous pennies.  All of the photographs on view were a very small 7x10” (as if carried around with him in a portfolio) and yellowed and browned with age.  The effect is meant to give the photos a museum quality, but I found the size and discoloration distracting for the most part.  Unless he had printed them all himself by hand, there is no reason why some assistant couldn’t have provided us larger, sharper prints to view.

The man and the era were the stars of the show.  With the exception of a few strong images of iconic figures like Martin Luther King, Jr. (pushed to the right of the frame by a sea of microphones, perhaps suggesting The Black Voice being heard for the first time) and some portraits of Andy Warhol (without his usual blond fright wig) and The Factory artists and some great shots of Hell’s Angels, the collection struck me as largely a student’s portfolio. Regardless of the time needed to master the technical aspects of black and white photography, many additional years are required to even begin to master what Henri Cartier-Bresson called ‘the decisive moment.’  Hopper’s portraits have the boon of the 60s zeitgeist and the man’s cult status behind them.  However, many of the shots wouldn’t stand on their own as works of art.

The lost crates were stuffed with images of several unrelated themes:  the 60s in New York and Los Angeles, Mexico and various abstract shots of objects.  Among these, only a few dozen struck my eye as having any great artistic merit other than being unrelated photo studies made by someone famous.  Walls filled with shots of old peeling posters, paint and rusty metal only reminds me of what most photographers shoot in their first five years.  You want to show EVERYTHING and damn the consequences.  But the true art of photography is in synchronizing the tool, the psychology of the moving human subject and the vision inside of the photographer.  This often requires a lifetime of study, dedication, observation and patience.

I don’t want to minimize the importance of the 60s as a society-shaping era, nor do I want to criticize the images solely on technique or execution.  Dennis Hopper was both a product of, a participant in and a partial documentarian of the turbulent 60s.  Simply by being Dennis Hopper, he had access to artists, celebrities, outlaws and counter culture iconoclasts which very few others could have managed to photograph.  His portraits of artists and celebrities are the most successful due to this relaxed familiarity.  It enabled Hopper to capture legends in repose.
Posted by Craig Robinson at 18:43 1 comment: