Chasing Shadows of the Past in Rüdersdorf Chemical Plant 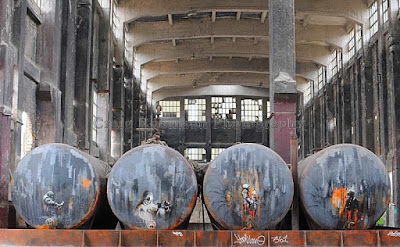 We planned our entry down to the square meter. We analyzed drop zones and entry points and scrutinized satellite photos of the abandoned plant in Rüdersdorf to determine the best way to infiltrate the site undetected. This is urban exploration in Berlin. This is Urbex Über Alles.

My partner in crime was the Infamous Abandoned Berliner, the single most respected and hated member of the urban exploration subculture. His Abandoned Berlin blog has a gazillion hits, he has an urbex book of the same name, and the man can hold his beer well into the wee hours at any spaeti in Berlin (He's Irish, so that helps). The reason he is hated and respected in equal measure: He tells people where the abandoned places are. This angers the Holy Druids of the Urbex Circle Jerk, who gather in secrecy with their hand drawn maps and meet in basements to discuss their next conquest in whispers, while quietly jerking each other off in circles. Cliques piss me off. Therefore I respect anyone who will tell me how to get to an abandoned place, how hard it is to get in, and whether my lardy ass will fit in through the hole in the fucking fence. At 6 foot 5, 280 lbs, I ain't climbing no fucking walls.

Urbex was a regular thang with me until the Urbex Druids decided I wasn't worthy. They took me to a few places, laughed while I squirmed through holes in the fences, and took snaps of me stuck in windows. Then they stopped inviting me. That and all the good places have been bought by developers and earmarked for certain destruction or worse—yuppie condos for fuck's sake. There are now urbex tours of the most popular sites in Berlin and you pay a pretty penny for the privilege. This defeats all of the fun of trespass and most of the fun of skulking in the shadows.

After a year or two off from the urbex scene I found another reason to skulk. The street artist known as Plotbot KEN dropped an atomic paint bomb on this particular plant we were entering. Plotbot's work can be described as a post apocalyptic dreamscape wherein lonely figures in hazmat suits quietly test the radiation and chemical contamination levels of a bleak future. When I first saw these figures on walls in Berlin-Kreuzberg, Wedding and other districts—I was hooked. As a full time pessimist with no hope for the future of humanity, I simply had to add Plotbot to my collection of street artists for my documentary project.


The Irishman and I crept along the rail tracks leading to the plant. He was shushing and denouncing me for being the large, loud-and-proud American stereotype that I am. "JAYzus you are loud! Let's not alert security!" he slurred. He shambled through the hole in the fence and hiccuped, still reeling from the breakfast drinking (two can play the stereotype game, muchacho). I could see that he takes the whole illegal trespass thing seriously. After about five minutes walking toward the huge cement abandoned chemical plant leviathan, he suddenly cried 'SECURITY! DOWN!' and dropped like a sack of beer-soaked potatoes. I tried to drop as gracefully as a 280 lb man with a backpack full of camera gear could. In the end I could only cut the tragic figure of a fat man on his knees in the dirt with his camera backpack sticking up on his hunched back like a saddle on an elephant. A truck roared past on a dirt road just ahead of us. Nobody saw the fallen sack of beer-soaked potatoes or the fookin' elephant.

"Security? In a dump like this?" I wondered aloud (really loud). "Yeah, once when I was here, there was some kind of a film crew running around; security was tight," AB informed. We didn't know it at the time, but one of the things they were filming on this very site was an episode of the popular political spy thriller series 'Homeland.' The entire 2015 series was shot and filmed in Berlin—even the bits where they were not actually in Berlin (like the Middle East). A dirty, abandoned chemical plant doubling as a refugee camp? Why not. You really are in a different world when you stagger through this dusty desolation.

We then proceeded to explore proper. The concrete behemoth towered over us and sprawled over an area about 10 times the size of your average mall. I was shopping for street art and was not disappointed. After sloppily scurrying between doorways of buildings to avoid detection by nearby construction workers, we found it. The Acid Tanks paintings stood stoic under a 100-foot-high cement ceiling with broken windows, crumbling concrete columns and rusty pipes. I stood in awe of the amazing merger of
rust, spray paint and decay, both naturally and artificially introduced.


Some street artists paint anywhere there is a blank wall. Others consider the space within the context of their works. In this respect, there is no better urban artist working in Berlin today than Plotbot KEN. In a world abandoned, rusting, seeping and dripping with chemicals, one man stands tall in the green muck to merge aerosol alchemy with the rotting ruins of yesteryear. 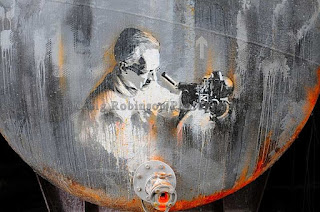 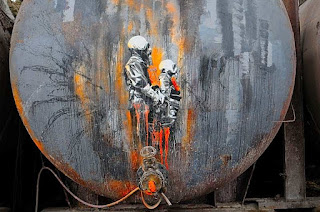